Lady Florence is an ex-Admiralty motor fishing vessel (MFV), one of over 1000 built during World War II as supply boats. She is 50 ft long, 16ft 6′ in beam, draws 6ft of water and weighs 35 tons net, 54 gross. She is a registered British Ship, Official Number 361575 and has an Ensign Permit to wear the red ensign of Her Majesty as defaced with the badge of the National Historic ships.

She has the character and history of a fine wooden ship and with only 12 passengers on board there is plenty of space on deck as well as in the wheelhouse and the comfortable saloon, which has a cosy coal fire in the winter months.

Lady Florence has a fascinating history. Built in Poole during 1944, she was launched “MFV 766” (the name Lady Florence came much later). She served initially at Glasson Dock in Lancashire, then from 1947 out of Plymouth and then Portsmouth from 1955. In 1963 she transferred to Sea Cadets at Midhurst Sussex, then Hove from 1969. In 1971 she went into private hands. There is a gap in the history from 1971 to 1977, in which year she was registered as a British Ship, named Margaret Jane, and was back at Glasson Dock. She was sold in 1983 to Geoffrey Ingram Smith of Woodbridge who renamed her Lady Florence and set up the river cruise business in Orford in 1984. He subsequently sold the business to Susan and John Haresnape in 1992 and with Craig & Kris, the family continue to operate the Lady Florence business. 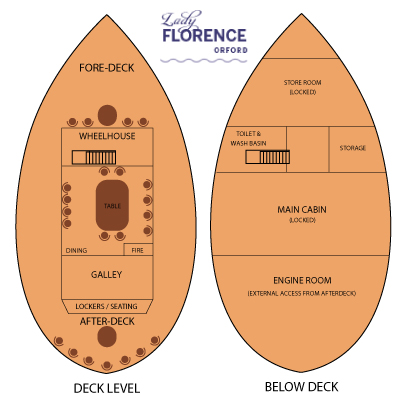